For now we are sticking with last year’s model of Tom and friends running the fantastic local jazz offer The Big Kettle with monthly jazz club special nights. We would love to be able to run more, but we are aware of the risk of booking bands and the potential need to cancel if there is covid disruption from either side. So hopefully we have struck a good balance and see how we go! We are currently only booking monthly visiting bands until Autumn 2023, but will keep our ears to the ground and if we feel able to offer more of these gigs then we will.
​

UP NEXT - The JONATHAN GEE TRIO 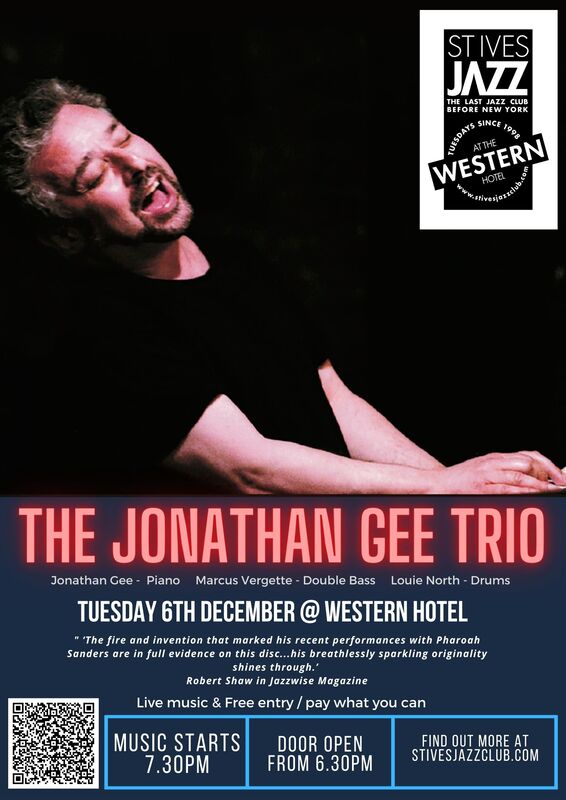 Jonathan Gee is one of the most imaginative composer-pianists operating today, with a succession of ever-enticing bands and projects, with world-class line-ups from Europe and the US. Aside from his own bands, which have produced 11 albums, he has also worked closely with Pharoah Sanders, Mark Murphy and Art Farmer, David Murray, Joe Lovano and Benny Golson, Bobby Wellins, Claire Martin, Tim Whitehead, Ed Jones, Cleveland Watkiss, Benet Mclean and many others.
With Tony Kofi, he co-founded the Monk Liberation Front, whose legendary performances of the complete Thelonious Monk catalogue have led to award-winning recordings. He has performed in groups comprised of leading musicians from France, Finland and Italy, such as Mika Myllari, Gaetano Partipilo and Danilo Gallo, and a fantastic trio emerging from the hothouse of the New York jazz scene featuring Joseph Lepore and Nasheet Waits, which has already packed out Dizzy’s at Lincoln Centre.
His latest album, released on ASC, is The Lions Revisited and is his first full singing recording.
For this visit to our St Ives Jazz Club he brings his longtime collaborator on bass. Local hero Marcus Vergette, and a young, Devon drummer making waves in London, Louie North. They will be performing songs from his new album, some Monk, Beatles, Wonder and Rihanna, and some reimagined Christmas songs, continuing on from a legendary Xmas gig performed by the trio at St Ives pre lockdown. Marcus, as well as being an internationally acclaimed sculptor, he has exhibited in The Venice Guggenheim for instance, has worked with many of the UK’s top jazz musicians including Mike Westbrook, Jean Toussaint, Steve Buckley and Don Weller. Louie, has recently graduated from Trinity College of Music, is already playing in the band of the great Alan Weeks and has played at top venues The Haggerston, Olivers and The Effra.
Robert Shaw in Jazzwise Magazine said ‘The fire and invention that marked his recent performances with Pharoah Sanders are in full evidence on this disc...his breathlessly sparkling originality shines through .’
​​